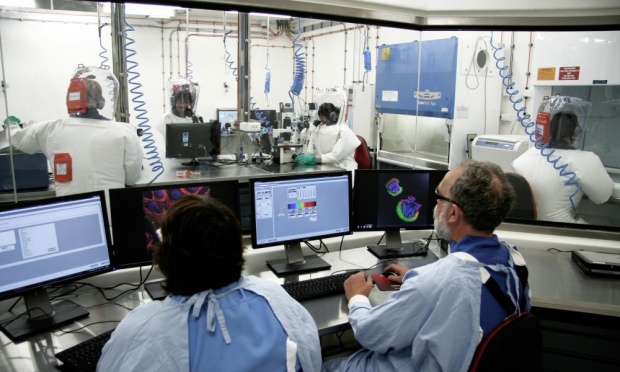 Biosecurity researchers inside a laboratory in Geelong. Photo: CSIRO/AAP

Individuals suspected of having a “serious contagious disease” could face five years in prison if they defy orders to stay at home, including forced vaccinations, quarantine or jail, according to new legislation passed into Australian law.

The Biosecurity Bill 2014 cleared parliament yesterday, and is aimed at ‘preventing’ the spread of diseases, such as Ebola, in human populations and agriculture, despite having no confirmed cases of the outbreak in Australia.

The government expects the human control orders to be “seldom used”, but believes they are important to manage serious communicable diseases, especially in light of the recent ‘Ebola epidemic’.

An article from The Guardian reads:

“New human biosecurity control orders enable a health department official to force anyone with signs or symptoms of a listed disease to isolate themselves or face arrest.

The director of human biosecurity can also order someone to be vaccinated or treated.

The government expects the human control orders to be “seldom used” but believes they are important to manage serious communicable diseases, especially in light of the recent Ebola epidemic.

The legislation allows biosecurity officers to conduct searches without warrants in emergencies related to pests or disease.

Several people have arrived in Australia from Africa with Ebola symptoms since the disease took hold in 2014, but there have been no confirmed cases.”

The second chapter of the legislative piece details control orders given to those individuals suspected of showing symptoms determined by the Health Minister, and the restricted movements and tests required if a person is categorised under the new law.

This includes limitations of movement, movement to a ‘secure area’ and more – without being proven to have the disease at any particular moment in the process:

“A human biosecurity control order may only be applied if an individual has signs or symptoms of (or has been exposed to) a listed human disease, or if the individual has not complied with an entry requirement under clause 44, and therefore poses a risk to the broader community.

These strict limitations in the application of a human biosecurity control order ensure that measures applied relate only to the management of a listed human disease or entry requirements and are a proportionate and legitimate limitation to an individual’s freedom of movement.”

The legislation continues to describe the procedure associated with the new control orders:

“An ill individual may be required by a human biosecurity control order to attend a specified medical facility to facilitate assessment and treatment of ill individuals, including undergoing an examination, providing body samples for diagnosis, treatment or undergoing a vaccination

It is essential, where an individual is suspected of suffering from a listed human disease, that the individual be moved to an appropriate place where medical treatment and privacy can be assured.”

RELATED: Ebola: A pretext to round up citizens? | ARP Excerpt

The new legislation, in the current form, was introduced to Parliament on November 27th, 2014 – although reports suggest an original document was tabled in 2012 and overshadowed by the election process at the time.

After multiple modifications, the Bill was introduced to the Senate on February 11th, and passed both levels of government on May 13th, 2015.

REVERSING THE BURDEN OF PROOF

One section of the legislation that has civil liberty campaigners questioning the authoritarian approach of the new legislation, is the section that pertains to burden of proof in suspected cases – both relating to human health and agriculture.

The Bill outlines a reversing the legality surrounding burden of proof, placing it in the hands of the defendant, as opposed to the traditional approach of the prosecution.

Reversing the evidential burden means that a defendant, rather than the prosecution, is responsible for presenting evidence to a court about a particular fact. It is then up to the prosecution to establish that this evidence is incorrect or does not apply.

This can be justified “in circumstances where the facts in question are peculiarly within the knowledge of the defendant and it would be difficult or expensive for the prosecution to provide evidence, but the evidence is readily and cheaply available for the defendant.”

Anyone suspected of having Ebola would face quarantine or jail under new powers: theguardian.com

New Australian laws force anyone with signs or symptoms of a listed disease to isolate themselves or face arrest: dailymail.co.uk

Erosion of Privacy in Australia – Basic facts you need to know: tottnews.com

Listen to Ethan, John and Lindsay discuss the new legislation in detail on Episode #32 of the Australian Roundtable Podcast on May 17th, 2015 below.

Timestamp has already been pre-selected for easy access amongst the range of topics discussed on this episode, including the US Consulate warning of ‘imminent terror’ in Australia; Marxist ABC against reading to children?; Brisbane Airport adopting ‘intelligent’ CCTV technology, and much more.

The Australian Roundtable Podcast is a Brisbane-based, independent news/analysis/discussion panel podcast which broadcasts live every Sunday from 3pm AEST.

The show features an eclectic panel of presenters who come together each week to discuss recent and topical news and current affairs from Australia and around the world.

The show provides an alternative perspective to that presented by the mainstream media, and is aimed at listeners in Australia and abroad who are skeptical of the official narratives being pushed by governments and the corporate, controlled news.

Leave a Reply to Your mum Cancel reply